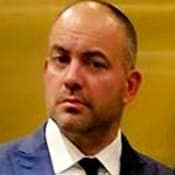 When I was in the seventh grade, I began having lower back, hip and leg pain. I found it difficult to make it around the track even once during P.E. class. My parents took me to my pediatrician, who sent me to an orthopedist, who sent me to a rheumatologist. I heard terms like “rheumatoid arthritis” and “spondylolisthesis.” The treatment I was given consisted of a prescription for motrin, 600mg, which I took twice a day until I was a sophomore in college, as well as some exercises.

When I was in college, I played football, which really increased the need to perform the exercises I’d been given years earlier. One day, after exiting a building and starting across a crosswalk, I was struck by a pickup truck driven by a distracted driver. Despite being tossed a few feet, and feeling beat up, the emergency room physician determined that I had no broken bones. After I was released, I returned to classes, and a few days later my life was changed forever.

The mother of a classmate of mine referred me to a chiropractor. I began receiving adjustments and therapy modalities. Not only was the pain from the crosswalk accident relieved, but that lower back pain–which had been my nemesis for the better part of six years–was gone! I could function better, move more, recover from football practices and games more quickly, and no longer was a slave to motrin.

A couple of years later, my roommate and teammate was in a summertime accident…all six feet five and two hundred seventy pounds of him. His treatment of choice? A chiropractor, of course. Around the same time, two of my former high school classmates began chiropractic school in Dallas. I chose to do the same, and I’ve been fortunate to help thousands of people from all walks of life.

I’m Paul Grindstaff, D.C., and I’m proud to serve as your chiropractor. I attended chiropractic school at Parker University, business school and graduate school at SMU, and undergrad at New Mexico Highlands University. My wife and I have three children and two dogs. I’m fortunate to serve on the board of directors of the SMU Mustang Club as well as the New Mexico Highlands Alumni board. On behalf of the staff and family of patients at ChiroRehab of Texas, we look forward to meeting you.

As an athlete himself, Dr. Sanio Dizdarevic has always been interested in health and wellness. It was that interest that led him to pursue a Bachelors of Science degree in Kinesiology, the scientific study of human body movement, at Texas Lutheran University in Seguin, Texas.

After graduating, Dr. Sanio wasn’t exactly sure what his next career move would be. Luckily, for him and his future patients, it took him only two days to decide.

A visit to Parker University in Dallas, Texas, he discovered the field of chiropractic. A way to use his knowledge and experience of kinesiology. Before visiting Parker University, he’d never heard of a chiropractor or the techniques they used.

As he learned about the many benefits of chiropractic treatments, he was completely inspired. He remembers watching his first adjustment and seeing the relief in the patient’s eyes.

After that day, he never looked back. In December of 2018, Dr. Sanio Dizdarevic received his Doctorate of Chiropractic from Parker University.

He worked as an Associate Chiropractor for a year and a half at a family chiropractic office where he learned how to treat many cases ranging from simple neck and back pain to sciatica and disc herniations. He saw many different ages of people as young as 8 months old to 93 years, helping enrich as many lives as he could.

Dr. Sanio Dizdarevic grew up in Bosnia and Herzegovina during the middle of the Balkan Civil War. He moved to Germany in 1994 with his parents and younger sister, Arnela, before settling permanently in Dallas in 1998.

As his family settled in Dallas, Dr. Sanio began playing tennis at the age of 7, competing in tournaments as often as he could.

He also discovered a love for soccer. There was one day when he was 13 where he fell on his lower back, dodging a slide tackle. The injury started as a bruise but over the next four years, it was so severe that he could only stand for 15 minutes at a time before the pain would set in. As time went on, his posture got worse and worse.

It wasn’t until his first adjustment in chiropractic school at 22 that he realized what he was experiencing wasn’t normal.

Looking back on it, there was one fateful day on the soccer field that not only sealed his fate as a chiropractor but also gave him that passion and desire to work with people to avoid the pain like his that he endured for so long.

Call or send us an email today! Our staff will respond as soon as possible.